This tweet asking how many URL shorteners an average tweeted link goes through piqued my interest, so I decided to find out. I wrote a couple of scripts to collect public tweets, look for links, follow them through redirections, and then do some quick and dirty analysis of the resulting data.

I was interested because I’ve noticed the browser hopping through multiple (slow) sites when clicking links on Twitter. But if you’re not familiar, you should also read Joshua Schachter’s excellent overview of URL shorteners and the problems they cause – it’s worse than just a longer wait for your page. But waiting for your page sucks too: compare this to that, which not only is slower, but has annoying clickthroughs.

But on to the data. The short version: the vast majority of links only go through 1 or 2 shorteners, but nearly as many go through 2 as go through 1. The average number of shorteners you have to go through is about 1.48. In other words, on average you’ll need to make 2.48 synchronous HTTP requests to start displaying a page linked on Twitter.

To determine this, I collected 101,668 tweets containing 20,868 URLs. Following the links through redirects to their destination and counting them up gives this histogram (note the log scale): 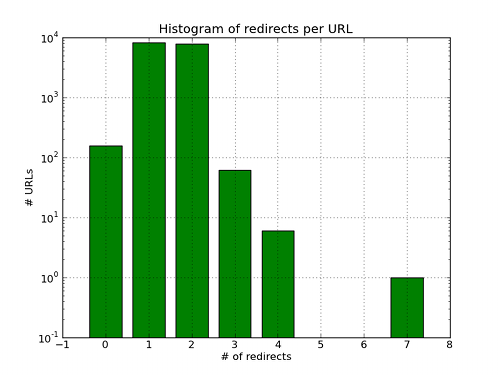 So a few links manage to get through the tweeting process unscathed, most have one or two shorteners between you and the real page, and then there are some outliers. And one was wrapped 7 times!

When I created the link above to the Wikipedia page about URL shortening that goes through many shorteners, some of them rejected already shortened links. They are at least making some effort not to re-shorten links. This may have more to do with spam than any other motivation, but it indicates some URL shorteners are avoiding these nested shortened URLs.

So I wanted to look into who is generating rewrapped links. First I looked at the top host names in shortened links, including ones discovered by following redirects. (Again, log scale.) 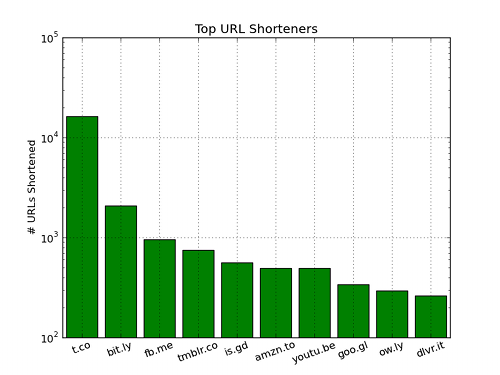 This essentially just shows market share. Not surprisingly, t.co is the winner, with some other big names following them.

But I was really interested in re-shortened links: links that redirect to another shortened link that also needs to be resolved. If you cut out the last shortened link (the one that finally points to the real resource), you can see who the worst “re-shorteners” are. 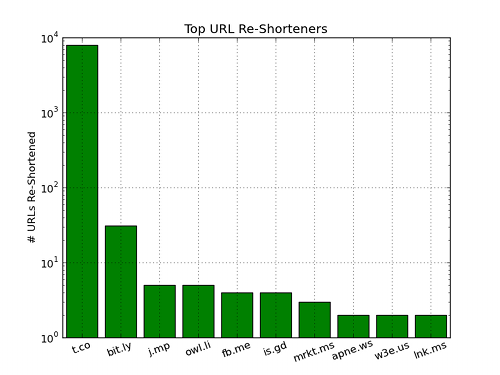 Twitter is by far the worst offender. Of course, as the last hop between the tweeter and the tweet being published, this isn’t surprising, but it also suggests that Twitter is always or at least very aggressively re-shortening links. This definitely meshes with my experience where Twitter will unnecessarily wrap a short link in t.co form, even if my tweet was short enough already. I’m assuming this is because they want to collect analytics – the value in collecting data about where tweets spread outweighs the cost of making links brittle and slower to load.

If you compare the last two graphs, you can also see which services seem to be actively avoiding reshortening. Those that drop to a lower position in the second graph are either not reshortening links or don’t receive links to be reshortened (i.e. they generate them only for their own pages). Good examples, I think, are Facebook (which isn’t reshortening) and Tumblr or YouTube (which probably only short-link their own pages).

My basic approach was pretty simple:

There were a couple of gotchas:

See the code for full details.