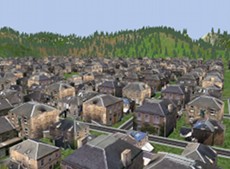 Metaverses are three-dimensional virtual worlds where anyone can add and script new objects. Metaverses today, such as Second Life, are dull, lifeless, and stagnant because users can see and interact with only a tiny region around them, rather than a large and immersive world. Current metaverses impose this distance restriction on visibility and interaction in order to scale to large worlds, as the restriction avoids appreciable shared state in underlying distributed systems.

We present the design and implementation of the Sirikata metaverse server. The Sirikata server scales to support large, complex worlds, even as it allows users to see and interact with the entire world. It achieves both goals simultaneously by leveraging properties of the real world and 3D environments in its core systems, such as a novel distributed data structure for virtual object queries based on visible size. We evaluate core services in isolation as well as part of the entire system, demonstrating that these novel designs do not sacrifice performance. Applications developed by Sirikata users support our claim that removing the distance restriction enables new, compelling applications that are infeasible in today’s metaverses.