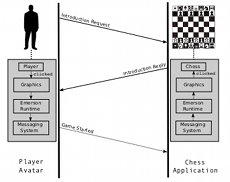 This paper presents Emerson, a new programming system for scripting objects in user-extensible virtual worlds such as Second Life, Active Worlds, and Open Wonderland. Emerson’s primary goal is to make it easy for novice programmers to write and deploy interesting applications. Scripting applications for these worlds is difficult due to two characteristics: the worlds must scale to millions of users and are therefore distributed, and there is no central authority or design so interaction is mostly between mutually untrusting applications.

Emerson itself is implemented as a scripting plugin for the Sirikata open source virtual world platform. We evaluate the benefits of its design by describing several application examples. Through these examples, we explore the interactions between sandboxing and multi-presencing as well as their implications and discuss potential future authentication mechanisms that would make secure in-world application development more accessible.